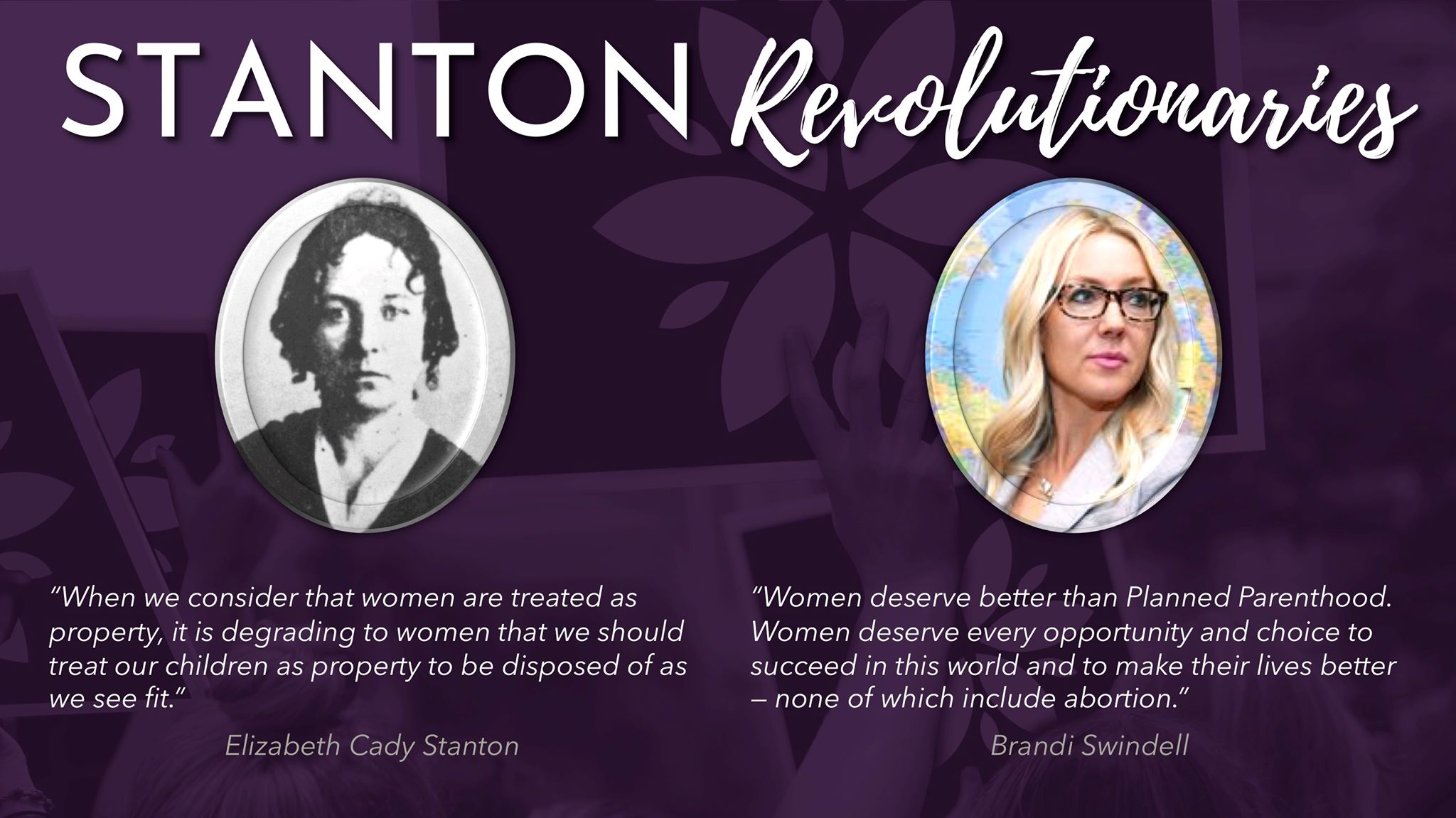 Revolutionary. The term invokes drastic change, an upset if not an overthrow of the status quo. In popular imagination it carries the connotation of political demonstrations and the use of force.  But at its very core it is the introduction of a new way of thinking that appears radical to the normal way of thinking.

Reformers can be somewhat revolutionary in their own right, but that is not always the case. Reformation seeks to better the old while revolution means to abolish it altogether and bring in the new. Elizabeth Cady Stanton was nothing if not a revolutionary which set her apart and often at odds with many of the reformers who were her contemporaries.

When Stanton’s friends wanted to focus only on minor women’s rights reforms, Stanton brought suffrage to the forefront believing that if women could get the vote other reforms would follow. Later when her close friend, Susan B Anthony, wanted suffrage to become the single issue, Stanton refused and pressed for women’s rights across the spectrum. Elizabeth Cady Stanton was America’s foremost feminist. She advocated for suffrage, property rights, the right to divorce, equal employment, educational opportunities, and equality under law for women.

Against her father’s strong objections, she married an abolitionist, and became an outspoken advocate for African-American slaves, rejoicing when the War Between the States broke out believing it would bring an end to slavery. By the end of the Civil War she had organized the largest petition drive in the United States for the passage of the Thirteenth Amendment. But when the Fourteenth and Fifteenth Amendment proposed to grant citizenship and voting rights to African-American males only, Stanton voiced her opposition to a colleague asking, “Do you suppose the African race is composed entirely of males?”

During the war years Stanton had put her feminist causes on the backburner for the sake of the war effort and abolition. Now her Republican friends and abolitionists rewarded her with ignoring her calls for suffrage and equality. Longtime friend Horace Greeley reported on Stanton’s efforts in New York State: “We are satisfied that public sentiment does not demand and would not sustain an innovation so revolutionary and sweeping, so openly at war with a distribution of duties and functions between the sexes, … and involving transformations so radical in social and domestic life.”

Radical. Revolutionary. That was Elizabeth Cady Stanton. In 1848 she organized the first Women’s Rights Convention in Seneca Falls, New York, where against the advice of her mentor, Lucretia Mott, she made the political enfranchisement of women the focal point of the convention. William Lloyd Garrison’s newspaper The Liberator covered the event under the headline “Woman’s Revolution”—an appropriate title considering that Stanton and Anthony would later found their own publication called The Revolution.

The Revolution would only run in print for two and a half years due to a lack of finances, partly because of Stanton’s refusal to allow abortifacient manufacturers to advertise in her paper. As one biographer would write, “She found abortion and the related act of infanticide ‘disgusting and degrading crimes.’” Feminists today have tried to recast Stanton’s statements on abortion as though her words don’t really mean what they say, but her repeated pattern of being willing go against the majority opinion of the feminists of her own day illustrates that she was a woman of principle and not a populist.

Stanton’s forever friend, Susan B Anthony wrote: “Cautious, careful people, always casting about to preserve their reputation and social standing, never can bring about a reform. Those who are really in earnest must be willing to be anything or nothing in the world’s estimation, and publicly and privately, in season and out, avow their sympathy with despised and persecuted ideas and their advocates, and bear the consequences.” No one would bear the consequences of the women’s revolution more that its grand architect, Elizabeth Cady Stanton.

She would suffer the loss of relationships, reputation, and respectability, but the greatest loss of all was her place in history. Because the church and the clergy had been so implicit in the subjugation of women and an outright opponent of women’s reform, Stanton ultimately came to reject their traditional interpretation of women’s roles in the Bible in favor of her own, prompting her to write the Woman’s Bible. For the conservative faction of the suffrage movement, this was the final straw. Stanton had become a liability in their estimation and they sought to censure her against the protests of Anthony. Stanton was a lightning rod, and those who opposed women’s suffrage used her positions to broad-brush stroke the entire movement as “antichurch, antifamily, and prolabor”. As a result, the succeeding generation ignored Stanton and canonized Susan B Anthony.

Stanton had been gone for twenty-one years and Anthony for seventeen years when women were finally able to secure the ballot. Three years later Seneca Falls celebrated the seventy-fifth anniversary of Stanton’s suffrage resolution, and yet the only mention of Stanton came from her daughter. No other speaker mentioned her, and her name was absent from the program. At the end of the event, a motorcade drove to Rochester to lay a wreath at Susan B Anthony’s memorial even though she wasn’t even present at the Seneca Falls Women’s Rights Convention in 1848.

Anthony had remarked to a friend that she would never be able to publish a collection of her own speeches because they were all Stanton’s. As Stanton herself said, “I forged the thunderbolts, and [Susan] fired them.” Anthony excelled in organizational skills whereas Stanton was gifted in communication. Both women were visionaries, and both were incomplete without the other. But there was never a question as to who stood at the helm. As Stanton would write to her close confidant Martha Wright: “Some are determined to throw me overboard, and [Anthony] is equally determined that I shall stand at the masthead, no matter how pitiless the storm.”

Three years before Susan B Anthony would travel to Seneca Falls to meet Elizabeth Cady Stanton, Stanton had organized the first women’s convention of its kind and brought suffrage to the forefront of the feminist cause. She was the de facto leader of the women’s rights movement in America. Lucretia Mott would advise her, “Thou art so wedded to this cause that thou must expect to act as a pioneer in the work.” Elizabeth Cady Stanton is the “Queen Mother” of Women’s Suffrage. And yet because of the political considerations of the twenties and the political correctness of subsequent decades, Elizabeth Cady Stanton has never been immortalized on coin or stamp like her protégé Susan B Anthony.  It’s akin to having a celebration of the Corps of Discovery and completely ignoring Meriwether Lewis or William Clark in favor of the other.

“Those who are in earnest must be willing to bear the consequences of their despised ideas.”

That is what makes a woman a revolutionary.

Stanton would smile if she could see the organization that is her namesake, not just because it honors her name but because it operates in her spirit of feminism. Empowering and educating women, Stanton Healthcare has become a model of women’s healthcare with a focus on women who find themselves in an unexpected pregnancy. With affiliates across the states and internationally in Belfast, Stanton Healthcare is the realized vision of its founder, Brandi Swindell, who like Elizabeth Cady Stanton, embodies what it means to be revolutionary.

When others were content with simply voicing their outrage to the government infringement on religious expression, Brandi chained herself to the Ten Commandments Monument. She has been arrested, vilified, and slandered because of her outspoken advocacy for the oppressed whether it be the women of her own community or the persecuted in China. For the sake of the cause she has lived out of her own vehicle and forgone salary and income. When others advised flying under the radar, Brandi invited the public spotlight to the injustice of abortion. Where others are content with mild reforms of the status quo, Brandi seeks revolution, launching the campaign to “Replace Planned Parenthood.”

A lightning rod to critics and a loose cannon to friends, revolutionaries find it hard to play nice. That is because they understand that revolutions are never pleasant by any definition. They are fraught with peril and demand a great sacrifice which is why like the great expeditions they are only undertaken by the few. Revolutionaries embrace the struggle and weigh the cost of sacrifice against the cost of inaction. Then, without regard for risk or failure, they press forward for the reward of total victory.

That is what makes us Stanton.

That is what makes us revolutionary.